Become a Member
Read Today's E-edition
Share This
Rocky of ages: The horror goes on 40 years later
0 Comments
Share this 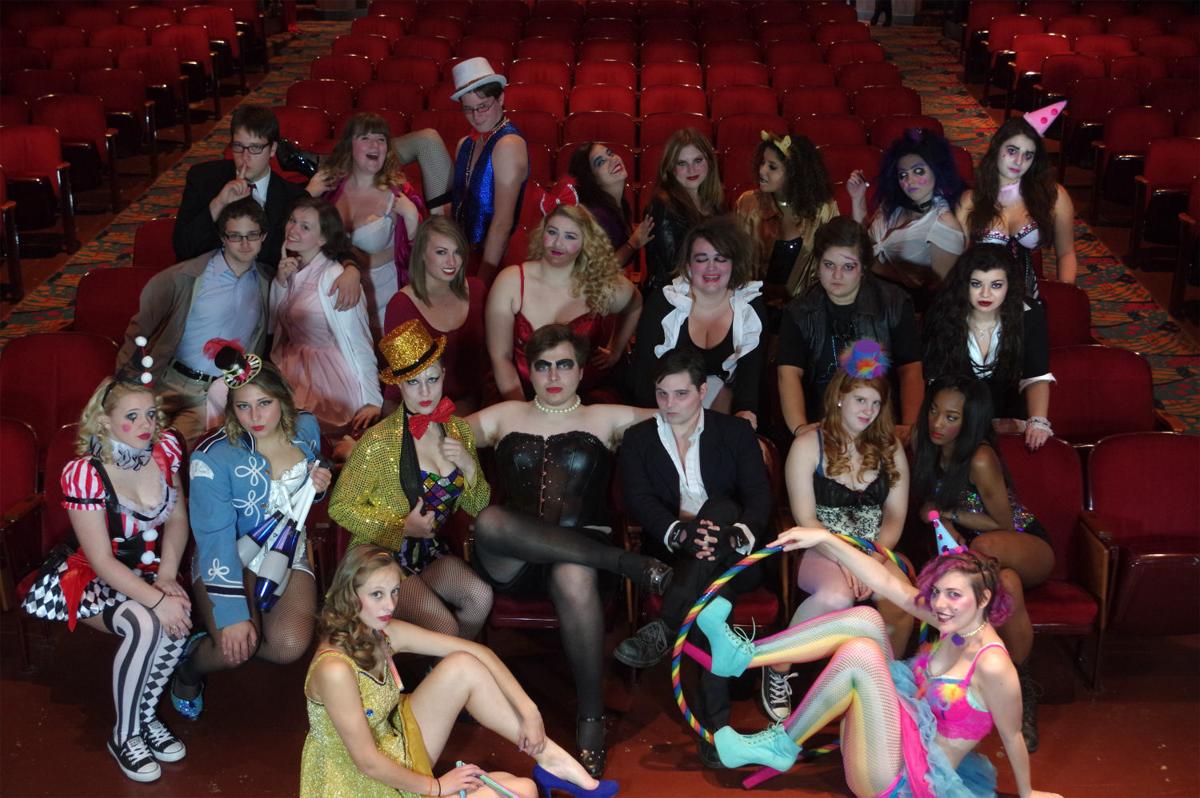 Illinois State University's Theatre of Ted will once again be present at this weekend's showings of the “The Rocky Horror Picture Show” at the Normal Theater. Showtimes are 7 and 10 p.m. Friday and Saturday. 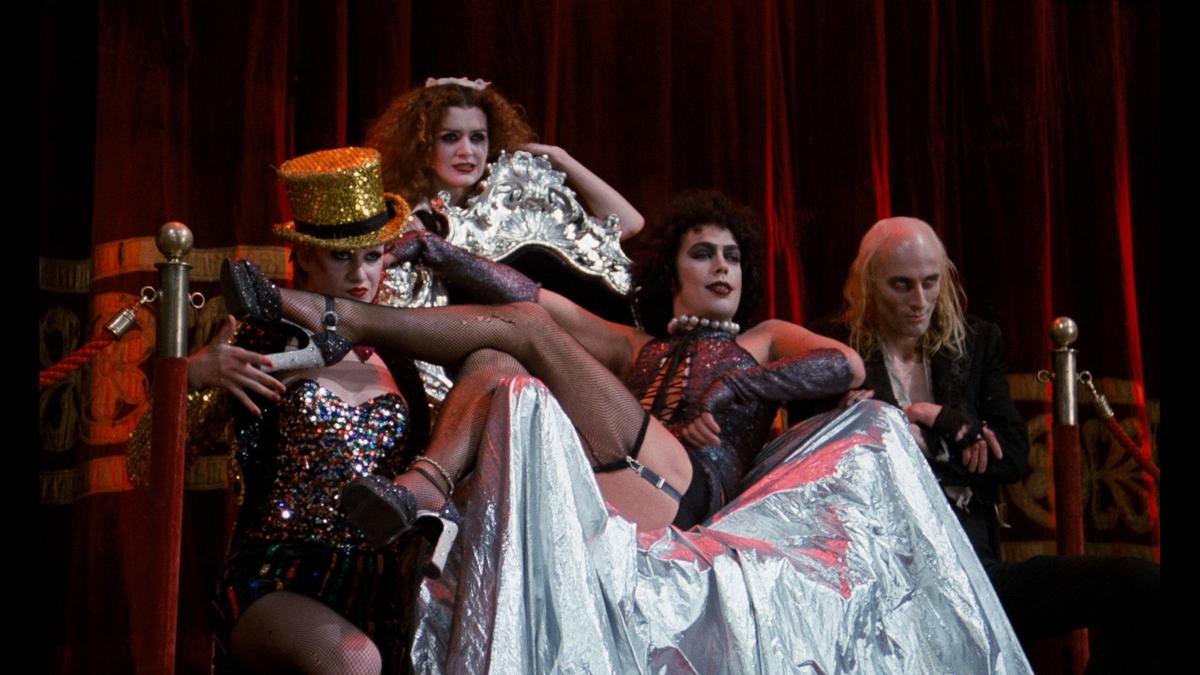 The iconic logo for “The Rocky Horror Picture Show” cashed in on the “Jaws” craze sweeping cinemas in 1975. 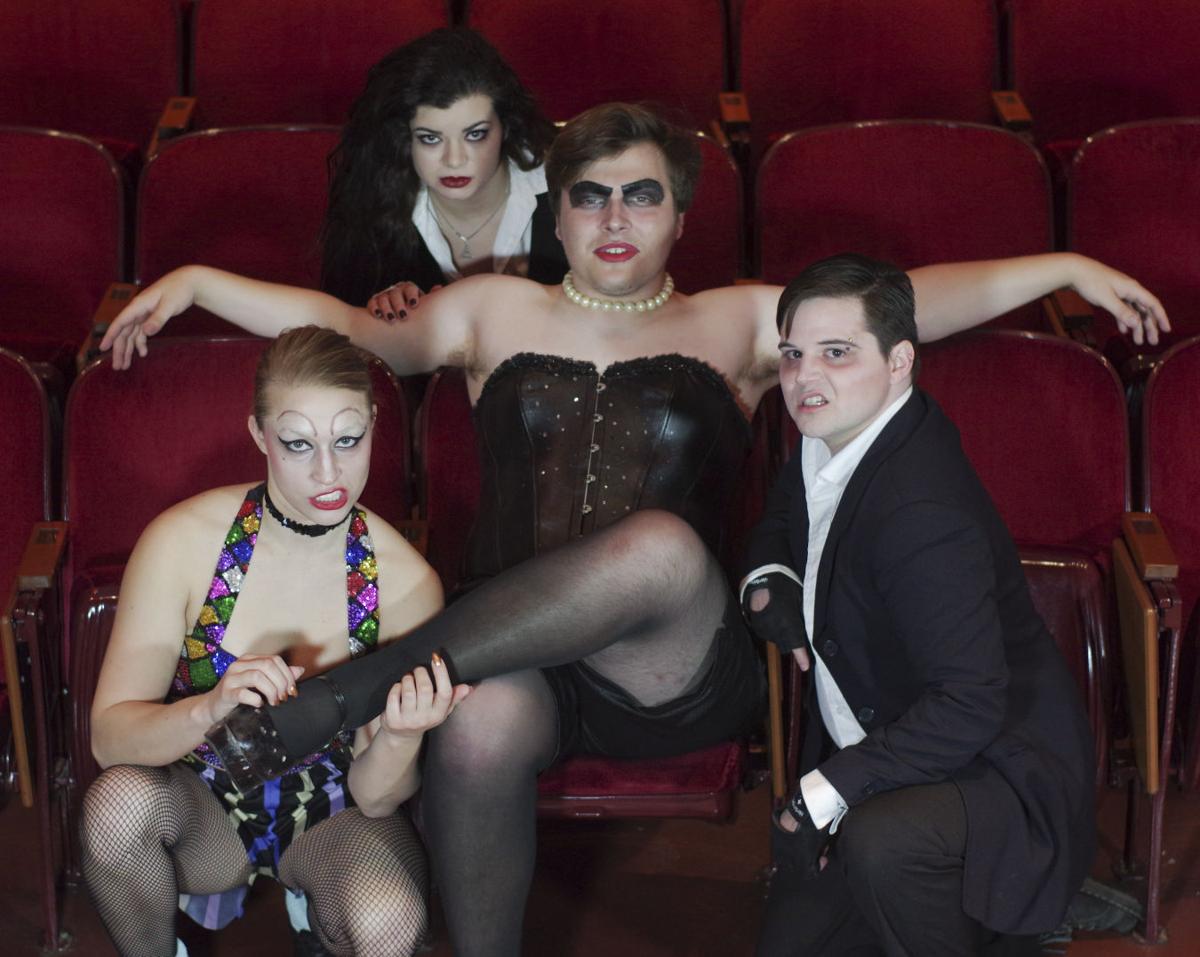 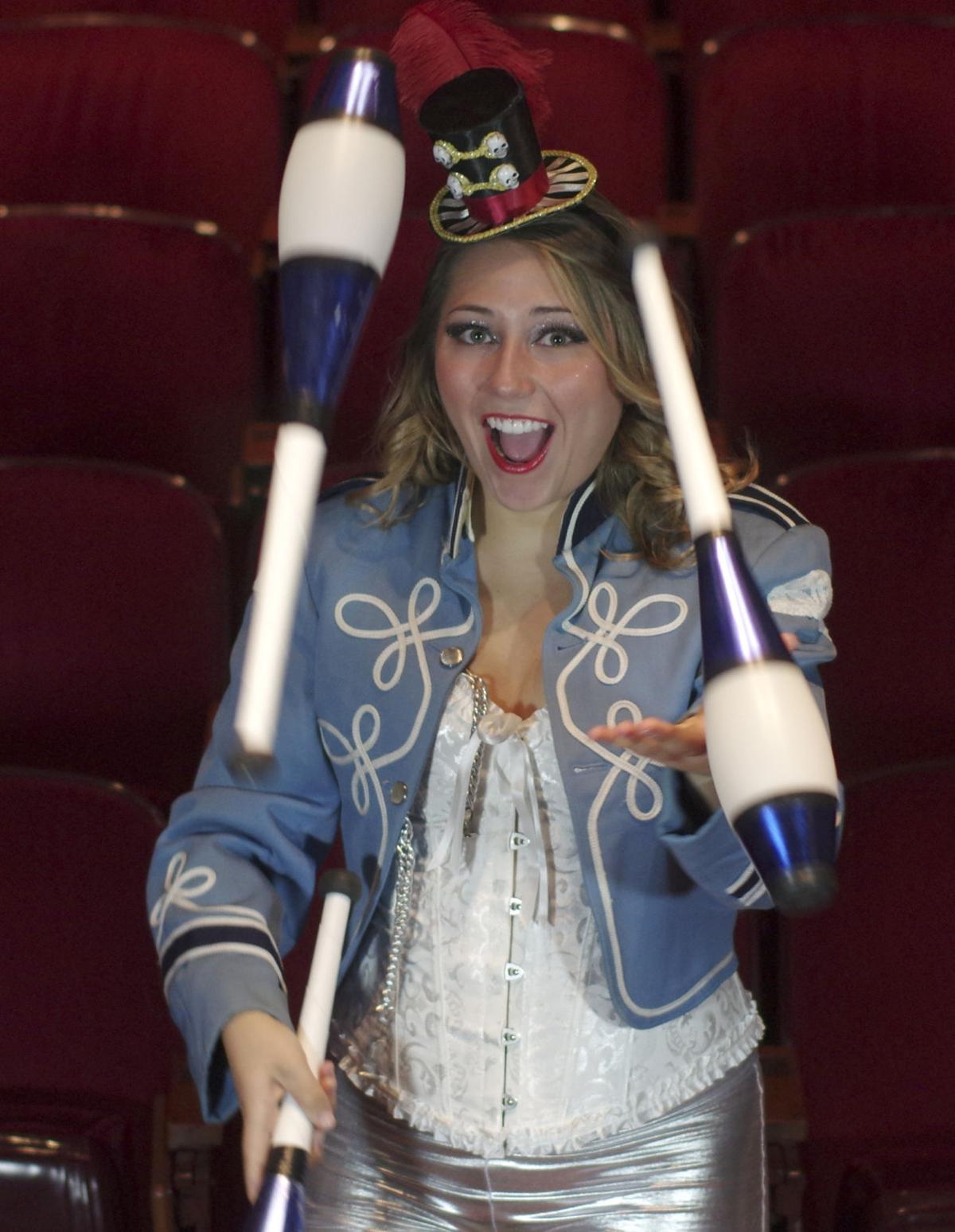 Joing this year's Theatre of Ted edition of “The Rocky Horror Picture Show” for the first time are several Gamma Phi Circus members, including Lizzie Minavich, as a “juggling Transylvanian.”

NORMAL — When "The Rocky Horror Picture Show" arrived in cinemas 40 years ago this fall (9/26/75), its subject matter was considered largely taboo ... not ready for prime time.

Like its stage predecessor, "The Rocky Horror Show," it was ostensibly a spoof of Hollywood B-horror/sci-fi traditions, with a big tweak: creator and co-star Richard O'Brien (the movie version's Riff Raff) was simultaneously crossing assorted lines involving sex, gender and a dozen hot-button points in between.

Faster than you could say "sweet transvestite," it began dying a quick death at the box office.

Until, that is, midnight showings in New York City caught on by surprise, spread like a panic through the nation and turned it into the ultimate cult movie for the generation at hand: a rite of sexually blurred communal passage that absorbed audience and movie into a single complicit entity, and that endured.

Witness the case, several decades later of Illinois State University's slightly underground collective, Theatre of Ted, which is celebrating its own milestone (25th) by moving its signature Halloween offering away from the campus (Capen Auditorium, Brown Ballroom) and smack downtown, to the Normal Theater.

Performances are 7 p.m. Thursday through Saturday, with a special 10:30 p.m. late show Saturday. Each showing begins with a "newbie ceremony" for "Rocky Horror" first-timers, assuring the setting of the proper Ted tone right off the bat.

For 11 Halloweens of its 25 years, the anything-goes Theatre of Ted has given "Rocky Horror" the shadow treatment that began cropping up in the wake of the midnight showings of the late '70s and early '80s.

In its early heyday, audiences attended midnight showings of the movie in fishnet hose-leaning costumes and mascara-favoring makeup, armed with scene-appropriate props (rice, confetti, toilet paper, party hats. etc.), and their own dialogue (both in sync and out).

Along the way, professional and unprofessional theater troupes began pitching in their echo effects: performing live in front of movie screens, echoing the dialogue and movement of the celluloid actors, and sometimes embellishing same.

Pete Guither, Theatre of Ted's faculty adviser for all 25 years of its history, says "it's a fun thing, and it's amazing to see how people come from long distances to see this. There's still such a group of 'Rocky Horror' fans out there."

A lot of Frank-N-Furters, Riff Raffs and Magentas have passed under his watch, and the enthusiasm for each new class of "virgins" (Rocky-ese for first-time audiences and performers) has never waned, he says.

It all faithfully follows the official Ted mantra of "dare to suck" by adhering to the no-holds-barred tradition of the group's weekly midnight open-mic sessions through the school year (in room 145 of the Center for the Visual Arts, free and open to all, both as audience and performers).

"We're very excited by the move to the Normal Theater," he adds. "The idea of being in a real, red-velvet movie theater is just right for the show."

All concerned agree that new venue will open up this popular campus offering to a wider audience.

Theater manager Adam Fox, a Ted alum himself, says "What's remarkable about Theater of Ted is that they offer an environment where anything can happen in the best possible meaning of those words."

Fox is anticipating the "sense of community" that "Rocky Horror" inspires, along with the cross-generational benefits that come with something 40 years old.

"I'm excited to see what the breakdown of the audience will be," he adds, noting that when the announcement of "Rocky" moving to the Normal was made, the response via social media was the most explosive he's seen to date ... "everyone from current freshmen to people who had been at ISU in the late '70s (when regular midnight shows at Bloomington's long-gone Eastland Cinemas were at their peak).

Dominique Johnson, Theatre of Ted's current president and in her fifth year as "Rocky Horror's" director, sees no generation gap separating the 1975 movie from the millennials of today.

"I really feel like it still resonates with our generation," she says. "It still draws people to another platform where they can behave a little bit wacky and do things they normally wouldn't do. But the main point is just to get together and have a lot of run re-enacting something."

One thing that seems to be clear from Ted's participants is that "Rocky Horror" is now a full-blown tribal tradition being handed down from one generation to another.

For example, Jake Giszczynski, in his fifth (and final) year as Riff Raff, recalls with affection his Uncle Dave's precedent: performing a shadow version of Riff Raff, a la Ted, with a local community theater group.

"And I actually first saw the movie at home after I asked my parents about it when I was 12 or 13," he says. "They were fans. They talked it over, and decided it was time to share it with me."

Max Babcock, a junior mass media communications major cast in the largely mute, half-naked role of Rocky, is another recipient of the film's tribal nature: His own mom was a "Rocky Horror" fanatic when she was a student at ISU in the 1980s, and will be in the audience this weekend mimicking moves, quoting dialogue and tossing props ... at her own son.

"I'm fine with being half-naked," Babcock says. "But I had a talk with mom, and it was like, 'are you sure you really want to come and see this ... because we do some pretty weird things ...'"

So doing the Time Warp has worked its magic again: one generation jumps to the left, the other steps to the right.

And together they do that pelvic thrust that drives everyone insane over "Rocky Horror" ... decade in and decade out, with no ends in sight.

What: ISU Theatre of Ted's “The Rocky Horror Picture Show”

Tickets: $10 ($2 more for props bag; patrons' own props allowed if not involving liquids, food or fire)

1. Which of these actors from the film version of "Rocky Horror" also appeared in the stage version? a.) Susan Sarandon; b.) Barry Bostwick; c.) Charles Gray; d.) Peter Hinwood

2. "Rocky Horror" was shot at the former home of what legendary British horror studio?

3. What iconic horror star was originally supposed to play the part of The Narrator taken by Charles Gray?

4. What ISU theater alum nearly ended up playing the role of Brad, taken by Barry Bostwick?

5. What ISU theater alum DID end up co-starring as Brad in the 1981 sequel, “Shock Treatment”?

6. Which key prop in the movie had already pulled duty in a horror classic made nearly 20 years earlier?

7. Peter Hinwood, who plays Rocky, left the acting business and became what?

8. Complete this lyric and name that tune, plus the movie it references: “Dana Andrews said prunes gave him ...”

Answers: 1. None appeared in the original stage version (Tim Curry, Patricia Quinn, “Little Nell” Campbell, Meat Loaf and Jonathan Adams were among the stage alums in the film); 2. Hammer Films; 3. Vincent Price, who bowed out due to another film commitment; 4. Cliff DeYoung, whose role in the TV series "Sunshine" forced him to just say no; 5. Cliff DeYoung, whose series was long over by '81; 6. Rocky's holding tank originally held the Frankenstein monster in Hammer's 1958, "Revenge of Frankenstein"; 7. antiques dealer; 8. "... the runes," from "Science Fiction/Double Feature," referencing the 1957 classic, "Curse of the Demon" starring Andrews.

Countdown is on to Halloween night ... and day

Netflix announces documentary about the career of Kanye West

Netflix announces documentary about the career of Kanye West

Illinois State University's Theatre of Ted will once again be present at this weekend's showings of the “The Rocky Horror Picture Show” at the Normal Theater. Showtimes are 7 and 10 p.m. Friday and Saturday.

The iconic logo for “The Rocky Horror Picture Show” cashed in on the “Jaws” craze sweeping cinemas in 1975.

Joing this year's Theatre of Ted edition of “The Rocky Horror Picture Show” for the first time are several Gamma Phi Circus members, including Lizzie Minavich, as a “juggling Transylvanian.”