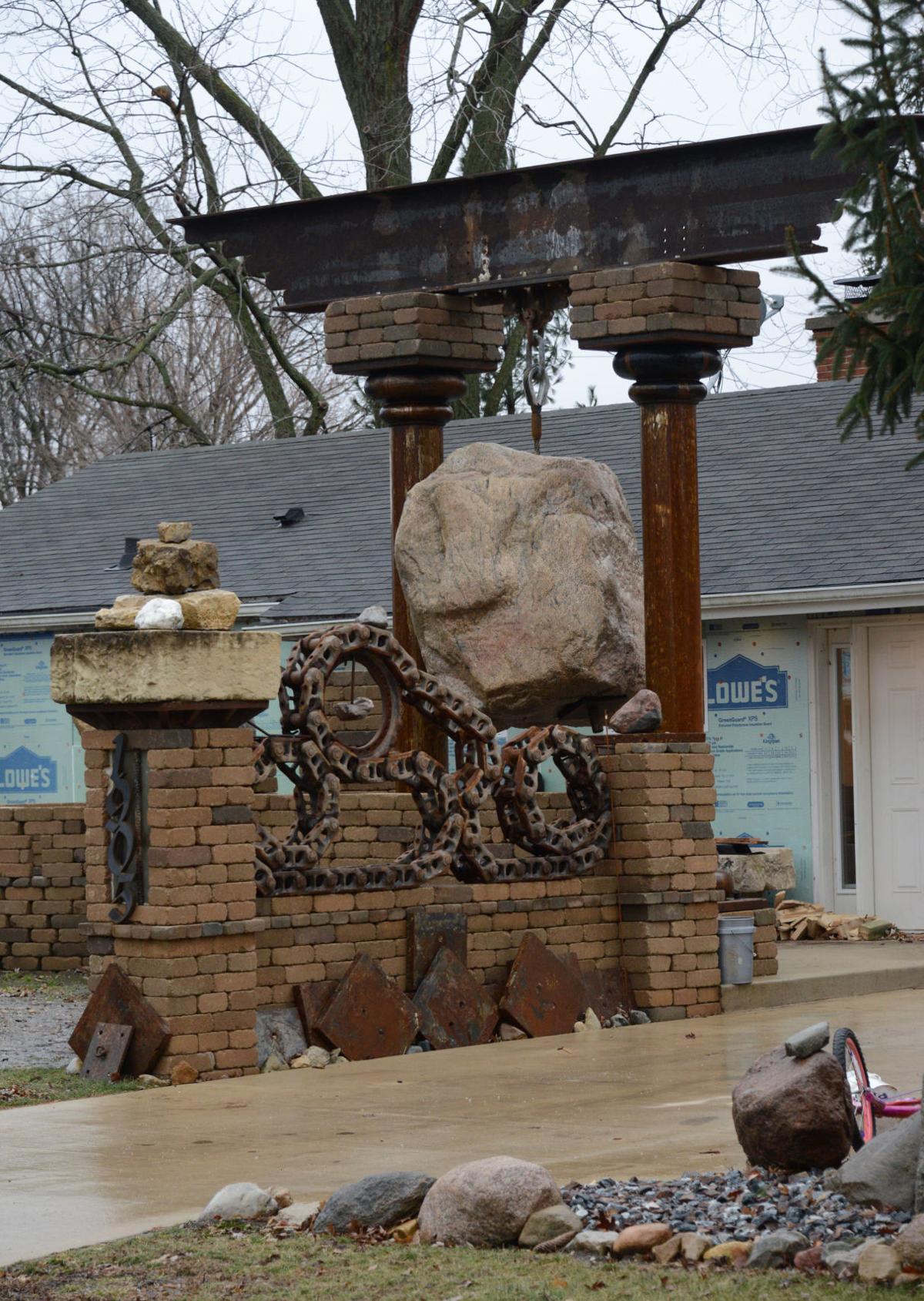 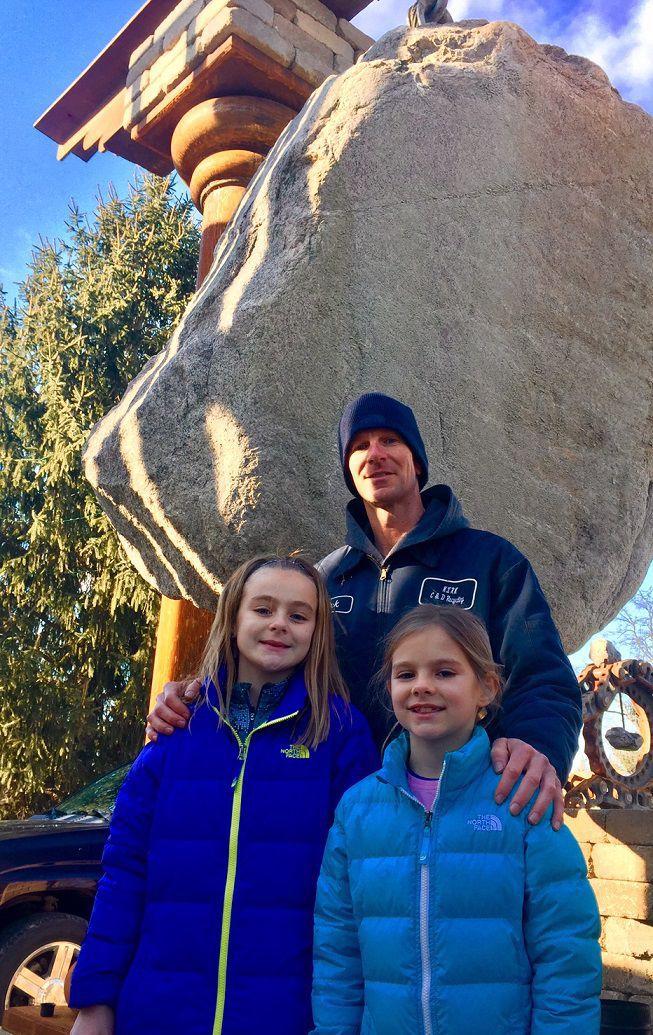 Addison, Tom and Avery Kirk, in front of one rock. 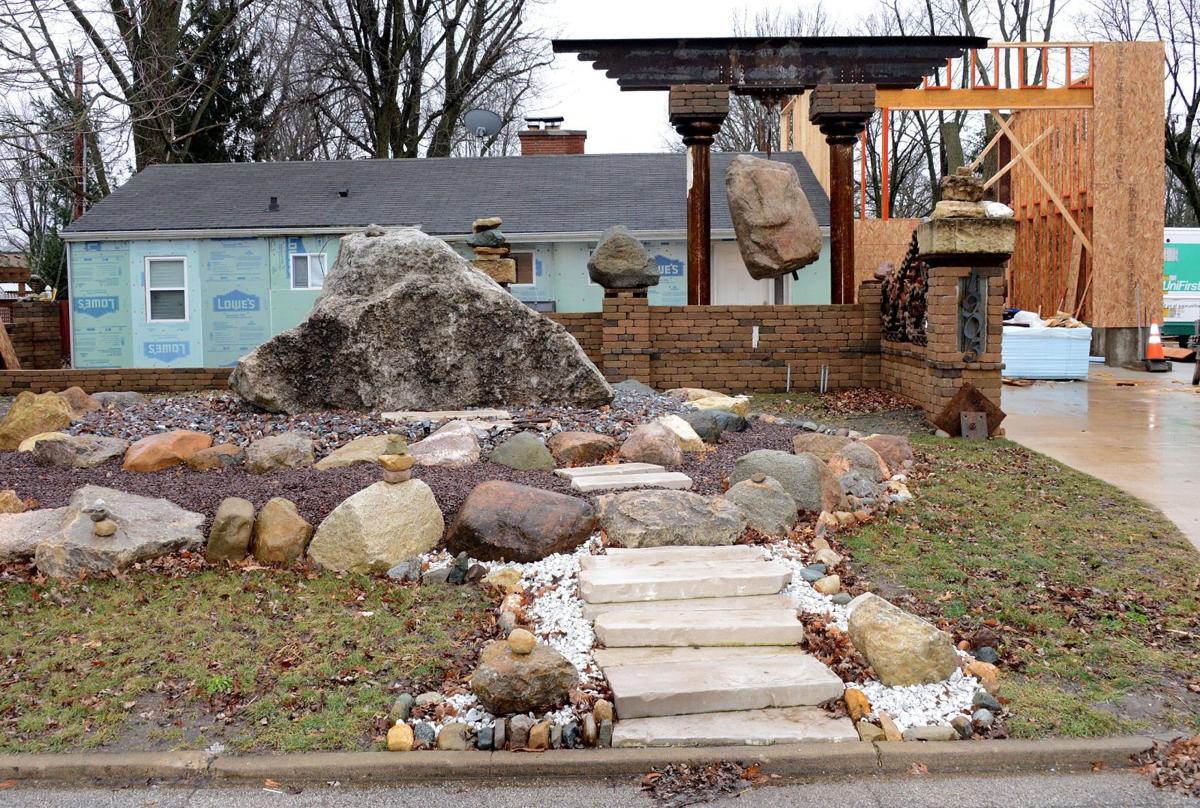 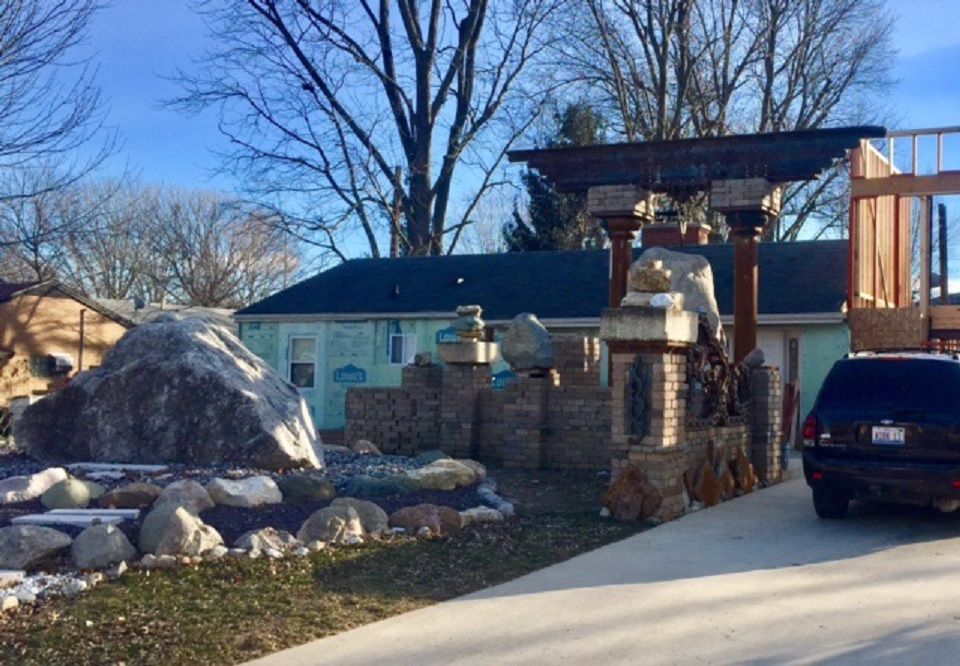 Cars inch past, sometimes at speeds of up to 3½ mph, the drivers no longer looking at the road, just the house and yard.

Some get out to get a better look.

“It can be most interesting to just watch the lookers,” suggests a neighbor who does not want to identify herself.

In Bloomington-Normal, as landmarks to motor past, there are several to consider — all the State Farm complexes, the Illinois State  and Illinois Wesleyan University campuses, Ewing Manor, the David Davis Mansion.

A simple ranch home, nestled in a quiet nook of southeast Bloomington, on a street that few have heard of (Garling Drive), it is fast becoming a must-see attraction.

In fact, it may already be atop the “What’s Up With That?” civic poll.

What’s up, to be exact, is mostly stone and rock — with a 15-ton, mountain-looking boulder being most prominent. In a side yard: large rocks that together resemble a turtle. Next to the driveway, mounted on brick and stone: an artistic metal "sculpture" of sorts, constructed from the rusted rollers, chains and track pads of an old bulldozer.

Most visually striking perhaps are a pair of Corinth-like columns, topped with layers of brick and an iron-girder canopy across the top, with a 6½-ton boulder hanging from it (just to drill through it took 6 hours), suspended by an industrial-strength chain.

“What is that?” asks Clark Patrick, looking quizzical, as he passes by one recent day.

It's a good question.

A demolition expert, Kirk is the 41-year-old whose company a few years ago razed the massive GTE complex along Empire Street in Bloomington. More recently, he leveled a block in the warehouse district near downtown and then the vacated, decaying ruin of the former Mennonite Hospital that later served as Electrolux-Eureka headquarters.

But it’s his 1905 Garling Drive home that these days is drawing all the attention.

“What the ...?” asks another passer, Jack Secord, of Bloomington.

With the assistance of his two rather adorable grade-school-aged daughters — Addison, 10, and Avery, 9 (they like to say they "rescue rocks") — Kirk is a man who, in an empirical twist of sorts, is by day endlessly excavating stone, moving rock, tearing down old stuff, and then by week's end building it all back up ... in his yard.

"I'm no artist, but I like building and making things," says Kirk. "I’ve always also loved rocks. I found that big boulder in a gravel pit and loved it. We brought in a crane and lowered it into the yard. That was the start ..."

"That" was about a year and a half ago.

By January 2016, when the stones began being collected and built up, concerned people called the City of Bloomington.

At first, examiners decided it was ugly, violated code, and Kirk was "strongly" encouraged to stop.

That's when Kirk responded: "But it's my form of landscaping."

He added: "Please point out what's in violation and I shall stop and/or alter it."

So they looked. And scoured. And looked some more.

That's when the city also realized that, while definitely different and perhaps offensive to some, there is nothing in city statutes to constitute illegality.

"Proving it a 'nuisance' would be a difficult task," says Tom Dabareiner, Bloomington's director of community development. "And code just isn't clear enough for us to pursue it."

A handy-type, Kirk also is building a two-story garage as a workshop, installing heated floors, readying for new siding.

“Tom is an eccentric, no question. But he's a great guy,” says Rob Fazzini, a former Bloomington alderman who these days is a work associate of Kirk’s.

Shortly after the stones began to gather — either coincidental or worrisome what such a creation might do to property values — two houses in the neighborhood went up for sale. But records show both sold reasonably fast.

Not everyone is offended, either.

Recently, one couple slowly driving slowly explained to Kirk that a mother was ill of health and "she just wanted to see the rocks again."

"When I started," says Kirk, "there were no real complaints. But I wasn’t getting any warm and fuzzy feelings either. I’d be the first to admit it didn’t look very good in the beginning. But it’s taking shape. I've talked with many of the neighbors about it all. My prediction is that by the time it’s done (no timetable has been set), it’ll be something that some will really like and some will really not."

Chris Rock might find it funny. Rock Hudson might have called it appropriate. The Flintstones, Barney Rubble, and Mr. Slate, might have considered it wonderful, and in Boulder, Colo., well, you get the drift here.

It's a hard rock cafe of sorts. For real.

And beauty? It is, of course, all in the eye of the boulder ... uh, beholder.

Best in the biz: The very best of Bill Flick

Bill Flick, iconic local writer and beloved Pantagraph columnist, has a body of work that is truly unique.  We're taking a look back at some o…

Question: Another longtime figure in Bloomington-Normal — Ray Lartz, 87, the white-aproned gent for more than a half century at Casey’s Garden…

So it was 29 years ago, on March 28, 1988, that a Hollywood icon entertained an audience at Braden Auditorium in Normal and said she "couldn't…

Another year has barely begun and already we have many entertaining news events, some of which can even be printed.

Addison, Tom and Avery Kirk, in front of one rock.