BLOOMINGTON — A weed that Central Illinoisans see along roadways, at the edges of fields or at construction sites has been domesticated in Central Illinois into a crop that researchers say has the potential to help combat climate change and provide additional income to farmers.

The high-protein seed oil that derives from the pennycress plant, with genetic modifications, has a plethora of environmental positives. It can be converted to biofuels for airplanes, feedstock, detergents, lubricants and more.

Agronomists and geneticists at Illinois State University, Western Illinois University and the University of Minnesota, with help from other institutions and the U.S. Department of Agriculture, are working to convince farmers that the genetically-modified version of pennycress, dubbed covercress, is a worthwhile plant that can be a cover crop and a second cash crop for farmers to grow from the fall until spring.

It would act as any other cover crop that absorbs and stores precious nutrients in the winter, said ISU professor of soil science Rob Rhykerd, “but the cool thing about pennycress is that we can use the seed to help produce these renewable fuels.”

“This can be a multi-billion-dollar a year new crop here when it gets established,” said Dr. John Sedbrook, ISU professor of genetics.

Sedbrook was a leader in modifying pennycress’ DNA to allow its seed oil to become identical to canola oil using a technology called CRISPR gene editing.

He said most of the credit goes to Terry Isbell, a researcher at the USDA Agricultural Research Service in Peoria, who noticed pennycress growing alongside the road and thought to research its viabilities as an alternative crop.

“Essentially it’s been sitting on the sidelines waiting to be a crop and we’ve just helped it along here,” Sedbrook said. “Just as a weed, it’s got agronomic traits that are quite attractive. It produces a lot of seeds and those seeds have about 33% oil content and about 20% protein, so just as a weed it has a good start.”

The genetic modifications reduced the seed’s fiber content, which increased its oil and protein contents further and allowed it to become edible. It resulted in a more golden-colored seed, compared to the weed’s dark brown seeds.

Sedbrook said he used a similar method from the 1960s that converted rapeseed into canola oil, but with newer technology. Two important steps contributed to the conversion: a mutation that reduced erucic acid content in the oil, making the oil edible, and another that reduced glucosinolate content, which is a defense compound that gives the protein and oil a bitter taste, he said.

At the same time, investors in St. Louis realized this change in the pennycress plant and began a startup company called CoverCress, which is working to commercialize the new plant derived from pennycress, now called covercress.

The company will have its soft commercial launch this fall for the first-generation covercress crop in Arenzville, about 50 miles west of Springfield.

The initial crop will be used to feed poultry.

Sedbrook said the USDA grant’s goal is to help commercialize the crop and the DOE grant is designed to develop the subsequent generations of the crop.

“You know from climate change here the weather is just all over the place. This is a weird summer,” Sedbrook said, pointing to the high rainfalls and cooler weather in Central Illinois, a drought in Minnesota, and the heat dome and wildfires in the Pacific Northwest.

“The goal we have is to find genetics that will improve the stress resilience so that covercress the crop can handle these big swings in weather. This is going to be an ongoing project,” Sedbrook said.

Not only will the seed’s oil be used for biofuels to help combat climate change, but the crop itself can help capture carbon dioxide from the atmosphere and absorb nitrates and phosphates in agricultural runoff.

After fall harvesting, bits of chemicals applied throughout the growing season — especially nitrogen and phosphorus — are left over in the field.

Cover crops are planted during fall to absorb the leftover nutrients and store them throughout the winter into spring, stopping them from leaching into surface waterways. Those nutrients held in the cover crop then act as another fertilizer for the next season’s crop — usually corn or soybeans.

“When a rain drop hits bare soil surface, it detaches soil particles, and then if you get more water coming down running off the field, it’ll erode the soil,” Rhykerd said.

But if a plant is there instead, the vegetation absorbs the rain drop’s energy and the water trickles into the soil rather than washing off the surface and taking soil with it.

A University of Tennessee study surveyed farmers and found that about 58 percent of them were interested in growing covercress if it is profitable.

Farmers’ concerns about growing the crop lay within the lack of knowledge of how to grow covercress, as well as the use of no-till practices, which require mechanical agitation of the soil.

The study said the tipping point at which growing the crop becomes more appealing to farmers is at about 1,500 pounds of seed per acre, which would come out to be about $75 per acre.

Rhykerd said it has been difficult to get farmers to buy in to growing the new crop. He said ISU has field days at its farm in Lexington to attract and educate farmers about it.

“So far I would say it’s been slow,” Rhykerd said. “I think demonstrating that pennycress can be profitable will really help.”

Sedbrook said the USDA project, called IPREFER, includes education and outreach efforts. He said they have booths set up at different county fairs.

He said after CoverCress’s soft launch this fall, the company plans to expand and begin extracting oil from the crop’s seed for future development.

“Within two or three years they want to be on over 10 to 20,000 acres and keep growing from there,” Sedbrook said. “It’s a process to get it established, but the market is there, so there certainly is incentive to get this to work.”

Take a look at this year's special Farm Focus section, which showcases Central Illinois agricultural producers. Have a story idea for our next…

In recent years, $23 million in federal and business grants has been invested in pennycress research in the Midwest to make it a viable commercial crop for feed and fuel.

"While McLean County Agriculture in the Classroom has many lessons and activities already prepared to teach students about a variety of areas, the sky is the limit when it comes to what we can provide," Carrie Vogel says. 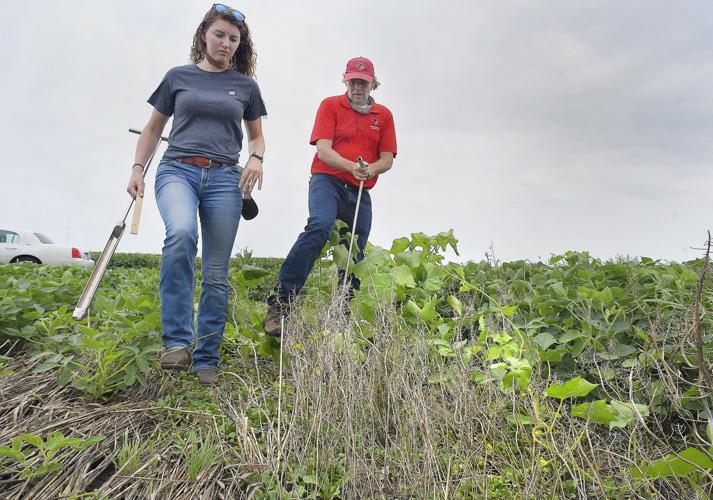 Illinois State University masters degree candidate Bethany Wohrley of Mendota, left, and Professor Rob Rhykerd pull soil samples from a soybean field that had previously been planted with pennycress, foreground, at the ISU Farm. The samples will help determine what levels of nutrients are taken up and released from the cover crop. 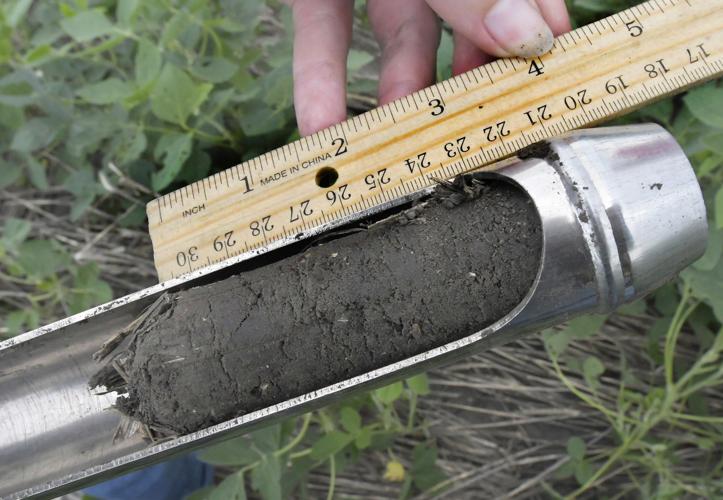 A core of a soil sample is measured as researchers study pennycress at the ISU Farm. 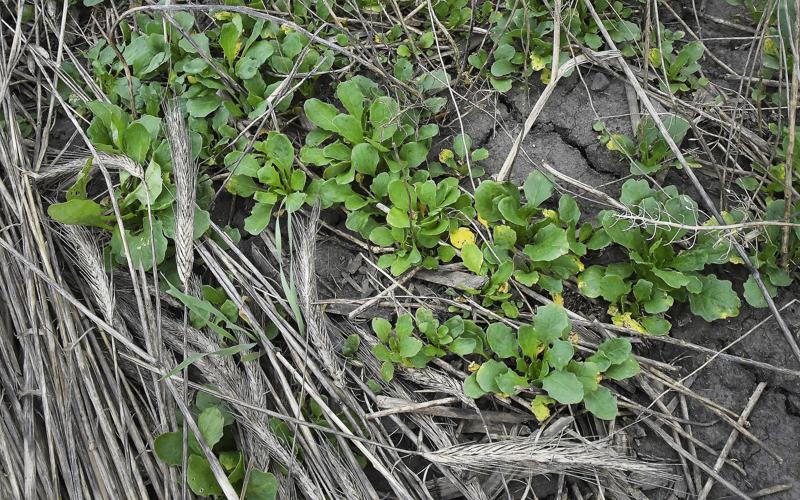 Volunteer pennycress comes up in a soybean field at the ISU Farm. The cover crop is one of the most promising plants being studied to make farmers a little money between seasons. 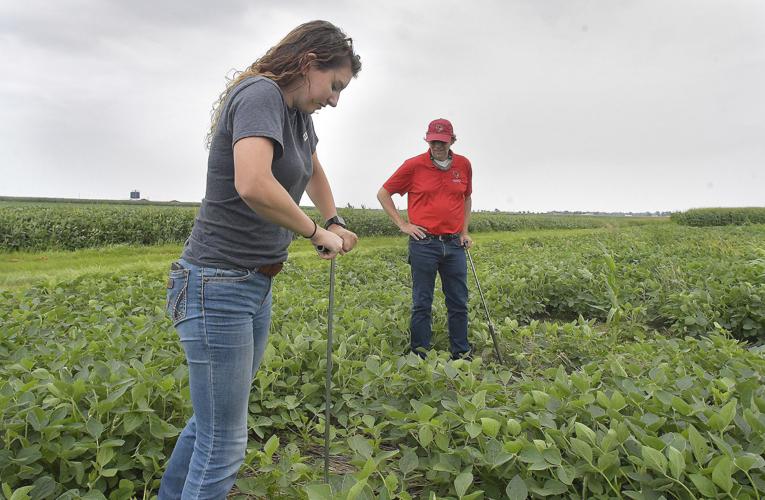